Right now it’s 1.25am. I’m sat propped up in bed, exhausted, nauseated and feeling groggy as hell. I probably look like I’ve been dragged through a hedge backwards at least 15 times, and would hate it if any firemen or police needed to break into my flat and see me this way. Lets just say thank god my boyfriend isn’t here to see me like this – he would probably fall out of bed in fright of waking up next to the monster from the black lagoon, and, to be honest that swamp creature is probably better groomed than me right now.

I feel like I am slowly going back to square one. Tonight, and last night, feel like the evenings of days gone by. Tonight feels like the weeks following my operation; where I couldn’t lie flat; had to stay perfectly still all night; lived in fear of explosions and leaks; and could feel every tug and pump of my tired and hacked up bowel – oh, and how can we forget, the agonising skin problems.

Most of that was caused by my mucus fistula, which has thankfully now departed, but – if you can bear it  – you can read about that nightmare here.

Ok, so things are nowhere near as bad as they used to be, and I feel pretty weedy for moaning about a few nights of sleep deprivation, for years I survived on potentially two-three hours a night if I was lucky! But having got used to living a slightly average life this is starting to feel like torture.

I used to get so little sleep that my nighttimes were almost as productive as my working day. While my boyfriend slept soundly next to me I would pain my nails, read novels, write blogs, record video blogs, write stories up and go into the other room to wash pots and dust etc. Tonight I have started to do the same. But, as I’m no longer used to this lack of sleep (well I am now, for the first time since I was a teen used to more than four hours, be it broken by toilet breaks, of sleep a night), I’m going to be a waste of space by lunchtime at work tomorrow.

If you’ve been following my pretty feeble attempts at writing my blog while balancing a hectic work schedule and trying to help my boyfriend move into his new house (sob) you will know that I have had a fair few infections (rather unpleasant) ones recently, but apart from that things, health wise anyway, have been finally looking up. But over the past week or so I’ve started to feel run down, exhausted and, to un-sugarcoat things, shit! 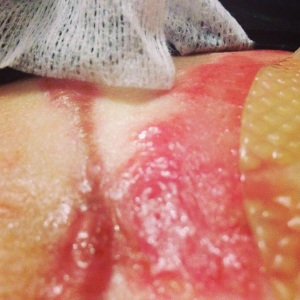 My skin tonight!! see what I mean

A lot has got to be said for the fact that I have managed to go without a single day off sick since I returned to work following my operation. Ok, so I don’t get some sort of medal or certificate for that (boo, I totally should!) but I feel pretty proud. But now the signs are starting to show that going at this hell-for-leather might not have been the best thing to do. But, there again, this happens every time I’m starting to get well, so I guess somethings will just never change.

My problem tonight is my skin. It had to happen but my skin has decided to reject my ostomy appliance. You would think this was something that could be easily fixed. WRONG. For most people it is, but I have rejected each and every one that my stoma nurse has tried – this was the only one that didn’t cause a very unsightly and painful rash. Now my body has decided it wants some drama, and decided that it is time to throw a paddy. This is not unusual. My body can’t live without drama, it doesn’t enjoy being well, it likes to be at the centre of attention. And right now it is dancing around in a sparkly spandex suit shouting ay attention to me, look at me, look what happens when you ignore me – and I’m having to sit up and take notice.

I’ve always struggled with my skin, especially around my stoma and other more intimate areas. It has been far, far worse than this in the past. But this time I just can’t handle it. My skin is oozing like crazy, and it looks almost burnt. My bags are struggling to stay on due to how damaged my skin is, and the wound is weeping all over the appliance in a truly revolting manner, which is making me feel smelly and sick.

I feel like I can constantly smell it. I think the smell simply gets in my nostrils and I can’t get it out, meaning I’m constantly paranoid that I’m having a leak, and that other people can smell it – most of the time it is other people farting or drains!

I’ve changed my appliance to a smaller one for tonight, in the hope of drying out some of the skin, but I’m struggling to sleep. I can feel the itching starting to creep in and I’m terrified I’m going to end up like a recovering crack addict wearing mittens on my hands to stop me itching like I had to last summer during the heatwave to stop me getting at my weeping surgical scar. I simply can’t stop going at it; god knows what people during the day think I’m doing – I don’t want them to think I have lice, or worse!!

I can’t leave the bag off for even a second as my stoma seems to wait for the very moment of liberation to go into overdrive. The only time I can get any sort of relief is when I’m in the shower letting the water seep down into the bag and wash the build up away.

So I think the time has come to give in. Tomorrow I will ring my stoma nurse and get an appointment to try and get this sorted. I want to get some sleep and to stop living in fear of my bags simply sliding off, and wanting to walk around with a peg on my nose. Unfortunately, I think me and my Manuka honey bags (which I’ve been literally attached to for about a year) are going to have to finally wave goodbye, that is before I end up in court for indecent exposure, stripping off and jumping into a nearby fountain simply to ease the non stop itch. I don’t fancy that one going in the press!

What you guys think

The story of Winnie so far

Some thoughts from Blaenau Gwent

Ostomy On The Run
Do I Look Sick?
InspGuilfoyle

The Daily Challenges of Crohn's Disease

Balancing precariously on the edge.

Everything IBD and Crohn's

A blog about living life with an Ostomy. How life goes on and how wonderful things can be achieved. It is also the perspective of a 30 something woman and life in general!

Everyday day life with a heavy helping of crohns and more. Chronic illnesses are nothing to be ashamed of.

A Sister Site of http://ahhhhhihavecrohnsdisease.blogspot.com

A Guy With Crohn's

OstomyOutdoors.com chronicles my return to outdoor adventures with a permanent ileostomy.

the good, the bad and the downright poo bag books