As someone with an ostomy bag and who’s had Ulcerative Colitis for well over a decade I’ve used more toilets than the average Joe.

Indeed you could probably call me a toilet connoisseur.

I’ve used lavish toilets for mayors, all to revealing bathrooms with glass doors, ones tiled and marbled with arty shots on the walls, and ones which should be visitor attractions they’re so unique and beautiful.

But as someone with IBD I’ve been forced to use bathrooms that no person should have to step foot in – in my desperation I’ve been made to venture where no woman should ever have to go, and I’m not talking about running into the mens!

For me, a lack of toilets or grossness is simply a deal breaker. Just as you wouldn’t go back to a restaurant where you got food poising, I won’t go back if I’d had a bad bathroom experience – no matter how good the food was. 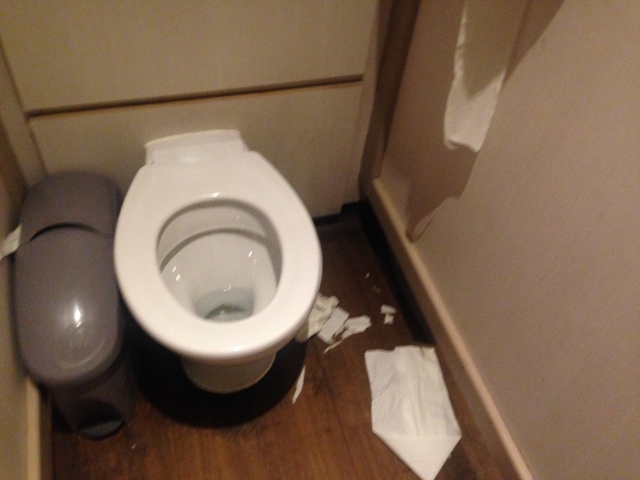 Yesterday I was caught short while out enjoying the sunshine in Cardiff. I’d wrongly thought the toilets at the museum would still be open, but they were closed after cleaning, with a line of security guards literally guarding them from soiling – they must have been waiting for the Queen to come!

Anyway I can’t tell you how upset I was. We’d wandered that way to enjoy our lunch on the grass because I knew there were toilets nearby, and by the time I walked into the blockade of guards I was nearly at explosion point

I got hot, flustered, agitated and the tears started brewing as my boyfriend ran around trying to find me a toilet. Like a hero he found one, but by then our day was tainted by my illness….it was a gut-wrenching reminder of the days when I couldn’t go two minutes without running towards the nearest cubicle.

Anyway I’ve decided to throw my weight behind the Colostomy Association’s and Crohn’s and Colitis UK’s efforts to get more accessible toilets for all, with facilities needed for those who need to change their bags.

Apparently one in 500 people in the UK live with a stoma, but despite that very few toilets have shelves, some don’t have hooks, and many are unclean….none of this is nice if you need to change an ostomy bag.

The case was highlighted when Welsh mum Caroline Richards’ posted a picture on social media of her stoma products scattered across a toilet floor as she tried to change her appliance. Her story was picked up by the national press and highlighted the need for basic things in toilets, which would make all the difference to hundreds of ostomates lives, and give everyone else somewhere to put their handbag and coat!

Disabled loos also seem to be cleaned less often, are more likely not to have toilet roll, and many can’t be used unless you have a key. There’s also the judgemental look when you use one,  and the fear that someone in a wheelchair might be waiting when I come out.

In my many years of running backwards and forwards to toilets I’ve seen how gross people can be – why does anyone think it is acceptable to decorate bathrooms with toilet roll, or eat sandwiches in toilets?

I’ve also marvelled at why the women’s loos are always the furthest away from civilisation; at times down or up flights of stairs, then along a maze of corridors, and sometimes even outside.

This is one of the most photogenic toilets I’ve found in Cardiff. 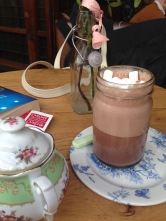 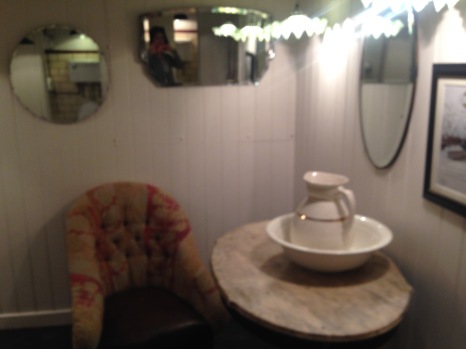 I’ve hovered above loos you should have to wear a gas mask to use, those blocked with stuff that reminds me of that pretty revolting scenes from Train Spotting, and had those horrible moments when you realise the only toilet roll available is all over the floor.

I’ve perched over holes in the ground terrified of spiders biting my bum, raced into public loos filled with graffiti and probably needles, tried to change my bag with my supplies placed on a dirty pub toilet floors with drunken revellers banging on the door, and endured the joys of broken toilet seats where if you don’t balance your weight on both bum cheeks equally you’ll fall on the floor.

One of the hardest things I’ve ever had to do was trying to change my leaking bag in a nightclub toilet, where it was so dark I had to use the torch on my phone to see what I was doing.

While I’m normally too desperate to make a choice over where I go to the loo, I always try to avoid public toilets at all costs. Basically because they are normally revolting and the queue for the ladies is rarely an option for me.

Anyway, this is the 2016 (well last time I looked it was) and it’s time for public services to be better and more accessible for all members of the public.

In a great move the Welsh Assembly (where I work) has changed its disabled toilet signs to show they are for people of all genders and with all disabilities.

Massive fan of this at the Welsh Assembly @CrohnsColitisUK #IBD #Ostomy pic.twitter.com/j5cPvZbhhF

I just hope this is something adopted by local councils, and then rolled-out further into coffee shops and shopping centres.

One thought on “Getting caught short, why toilets need to be accessible for everyone”

What you guys think

The story of Winnie so far

Some thoughts from Blaenau Gwent

Ostomy On The Run
Do I Look Sick?
InspGuilfoyle

The Daily Challenges of Crohn's Disease

Balancing precariously on the edge.

Everything IBD and Crohn's

A blog about living life with an Ostomy. How life goes on and how wonderful things can be achieved. It is also the perspective of a 30 something woman and life in general!

Everyday day life with a heavy helping of crohns and more. Chronic illnesses are nothing to be ashamed of.

A Sister Site of http://ahhhhhihavecrohnsdisease.blogspot.com

A Guy With Crohn's

OstomyOutdoors.com chronicles my return to outdoor adventures with a permanent ileostomy.

the good, the bad and the downright poo bag books